I found this image the other day while catching up on my reading.  It’s strange, I’ve been working on the Internet for quite some time (since before the advent of Twitter), and have yet to make it through all of the stages.  I suppose I spent most of my time at stage one, or rather what I would call stage zero – indifference. 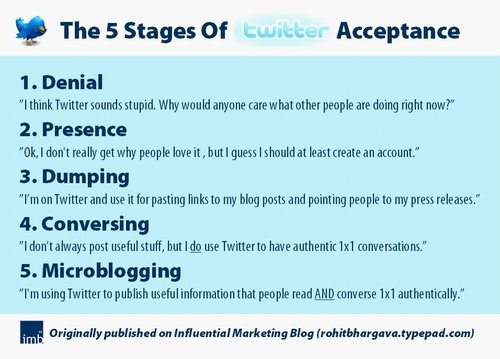 Until recently, I’ve always lumped Twitter in with MySpace and text messaging – an unnecessary app that people used only because it was new, or because they were bored, or both.  If a few people wanted to spend their time getting carpal tunnel trying to dictate every nuance of their day, it didn’t really concern me.  I didn’t deny that Twitter may have been fun for some; I just didn’t see it as a worthwhile for most people.

Then I hit stage two right on the nose.  I think I may have even said, “I guess I should create an account, and at least reserve my name.”  Totally logical.  That started the slow process of integration.

Currently, I’m sort of hovering around stage three.  I “get it” now.  I see why Twitter can be a powerful tool.  I enjoy seeing what people are up to, and pasting an occasional “tweet.”  I’m still no Twitter maven, but I see the value in the tool.

I think of Twitter as a component of the “virtual conversation.”  If you think about how you converse with the people who are physically around you,  you’ll notice there are different levels of communication.  I know, 80% of communication is nonverbal; so we can throw that potion out for this example, but here are 5 levels from lowest to highest:

So where does Twitter fit in?  For me, Twitter is right between 1 and 2.  It’s not always as boring as the weather, but often is.  Then again, the weather isn’t always boring; and sometimes more comes out of that type of conversation.  Information is often passed along via “tweets.”  Some of it can be interesting and valuable – some worthless.

It’s easy to shy away from this type of conversation – to label it as trivial or unimportant.  But, socially, one is rarely complete without it.  The same can be said for using Twitter as part of an effective online communication strategy.  You don’t have to fall in love with it – the point is to not ignore it.  Listen.  Contribute.  And soon you’ll find the right balance. 97DNBVZQA968